Belt transmission is the transmission of mechanical energy by means of a flexible element - the Caterpillar drive belt, due to frictional forces or engagement forces (Caterpillar timing belts). It can have both a constant and variable gear ratio, whose shafts can be with parallel and intersecting axes. 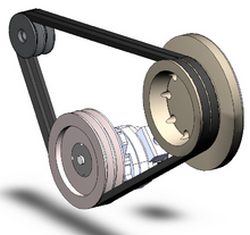 The Caterpillar belt performs two tasks: it operates a gas distribution system and aggregates of additional equipment such as a Caterpillar generator, a Caterpillar air conditioner compressor and so on.

There is a huge variety of drive belts:

Also distinguish single-row belts and multi-row Caterpillar belts. All of the above belts have one task - to drive the Caterpillar pulley of additional equipment or to drive other systems of equipment.