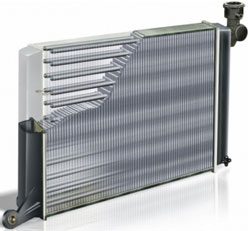 - heat the air in the ventilation, heating and air conditioning system;

- cool the oil in the lubrication system;

- cool the air in the turbo system.

The principle of the cooling system is as follows. Thanks to the liquid pump, the coolant is in constant motion, circling around, washing the hot walls of the cylinder head and the cylinder. Thus, it is possible to avoid overheating of the engine, since heat is transferred from the heated parts. Further, the hot liquid is sent to the cooling radiator, which provides heat removal to the environment. This ends the cycle, and the cooled liquid goes through a new cycle.