Caterpillar crankshaft is one of the most responsible and costly design elements of an internal combustion engine. It converts the reciprocating motion of the pistons into a torque. The crankshaft senses periodic load variables from the pressure forces of the gases, as well as the inertia forces of the moving and rotating masses. 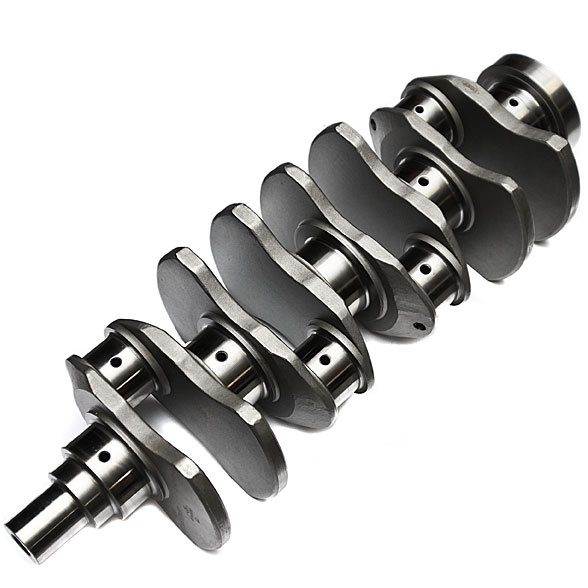 The crankshaft of the engine, as a rule, is a one-piece structural element.

The shaft is made of steel by forging or cast iron. On diesel and turbocharged engines, more robust steel crankshafts are installed.

The connecting rod, located between the two cheeks, is called the knee. The knees are located depending on the number, location and order of operation of the cylinders, engine speed. The position of the knees should ensure the stability of the engine, uniformity of ignition, minimum torsional vibrations and bending moments.

The rotation of the crankshaft in the supports, and the connecting rods in the crankpins is provided with sliding bearings. As bearings, split thin-walled liners are used, which are made of steel strip with an applied antifriction layer.The protrusion, which they fix in the support, prevents the inserts from rotating around the neck. To prevent axial movements of the crankshaft, a thrust sliding bearing is used, which is mounted on the middle or extreme root neck.

The power take-off from the crankshaft is made from the rear end (shank) to which the flywheel is attached. At the front end (toe) of the crankshaft are seating seats on which the camshaft drive gear (asterisk) are fastened, the drive pulley of the auxiliary units, and in a number of designs - the torsional vibration damper. By design, these are two discs and the elastic material that connects them (rubber, silicone fluid, spring), which absorbs the vibration of the shaft due to internal friction.