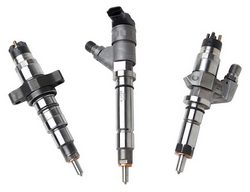 The diesel Doosan injector is one of the main elements of the diesel engine power system. The Doosan injector provides direct fuel supply to the combustion chamber of the engine, as well as metering the supplied fuel at a high frequency (more than 2,000 pulses per minute).  Doosan Injector performs an effective spray of fuel in the space above the piston. Fuel as a result of such spraying takes the form of a torch. Doosan injectors of different fuel supply systems have design features and differ in the way they are controlled. The injectors are divided into two groups:

The principle of operation of the diesel power system with the mechanical control of the Doosan injector is as follows. A fuel from the fuel tank is supplied to the Doosan fuel pump of high pressure (CNT) (Doosan injection pump). The supply is provided by a Doosan feed pump, which creates a low pressure required to pump fuel through the fuel lines.

Further development of the Doosan diesel fuel supply systems resulted in the appearance of Doosan injectors, in which fuel is supplied to the cylinders by means of electromechanical injectors. In such injectors, the Doosan injector needle opens and closes the access to the spray gun, not under the influence of fuel pressure and counteracting the force of the spring, but by means of a special controlled solenoid valve. The valve is controlled by the engine control unit, without the corresponding signal of which the fuel will not enter the nebulizer.