The inlet system Doosan is designed to allow the engine the required amount of air and the formation of a fuel-air mixture. The term "intake system" has appeared with the development of the design of internal combustion engines, especially with the advent of a direct fuel injection system. The equipment for supplying the engine with air ceased to be just an air duct, but turned into a separate system. 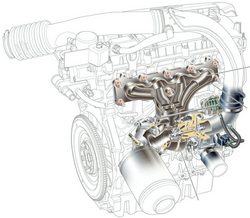 To improve the filling of the cylinders with air, the Doosan turbocharger is used to increase the power in the design of the modern diesel injection system.

Air intake provides air intake from the atmosphere and is a branch pipe of a certain shape.

How the Doosan Intake System Works

The Doosan exhaust system is designed to remove exhaust gases from the Doosan engine cylinders, to cool them, and to reduce noise and toxicity.

The exhaust system includes a number of structural components, including the exhaust Doosan manifold, particulate filter, silencer and connecting pipes.

All the components of the exhaust system are located underneath the Doosan Construction equipment.

Doosan air filter for the engine - a paper, felt or other air cleaner that prevents dust and dirt particles from entering the fuel / air mixture system. Just like the Doosan oil and fuel filter, the air contributes to a stable and trouble-free operation of the internal combustion engine. The purpose of the air filter For the smooth operation of the Doosan engine, as you know, you need air. If it contains mechanical impurities or dust particles, the functionality of the motor is impaired. The air filter serves as a reliable barrier to various kinds of contaminants. Replacing the Doosan air filter - a responsible process, to ignore which is unacceptable. Moreover, it needs to be done in a timely and regular manner. For Doosan heavy equipment, the filter change becomes especially urgent. The reason for this is the work of the Doosan heavy equipment in difficult conditions, such as quarries, mines, construction sites and so on, far from service organization. Therefore, the Doosan air →