The Doosan cooling system is designed to cool the engine parts that are heated as a result of its operation. On modern technology, the system, in addition to the basic functions, performs a number of other functions, including: 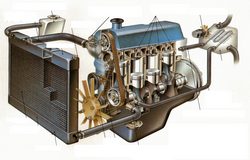 Heating of air in the system of heating, ventilation and conditioning;

Cooling of the oil in the lubrication system;

Air cooling in the turbo system.

Depending on the cooling method, the following types of cooling systems are distinguished: liquid (closed type), air (open type) and combined. In the liquid cooling system, the heated parts of the engine are drained by a liquid stream. The air cooling system uses airflow. The combined system combines the liquid and air systems.

The Doosan engine cooling system includes many elements, including a Doosan coolant cooler, an oil cooler, a heat exchanger for the heater, a Doosan radiator fan, a centrifugal pump, and a surge tank and thermostat. Control elements are used to regulate the operation of the system.

The Doosan radiator is designed to cool the heated coolant with a stream of air. To increase heat dissipation, the radiator has a special tubular device.

Along with the main radiator in the cooling system, an oil cooler and a radiator for the exhaust gas recirculation system can be installed. Doosan oil cooler serves to cool the oil in the lubrication system.

Circulation of coolant in the system providing the centrifugal Doosan pump. Centrifugal pump Doosan can have a different drive: gear, Doosan belt and others. On some engines equipped with a turbocharger, an additional coolant circulation pump is connected to the engine control unit to cool the charge air and the turbocharger.

The Doosan thermostat is designed to regulate the amount of coolant passing through the radiator, which ensures an optimal temperature regime in the system.

The Doosan radiator fan serves to increase the cooling intensity in the radiator.

The Doosan temperature sensor captures the measured value and converts it into an electrical signal. To expand the functions of the cooling system at the radiator outlet for additional monitoring of the coolant temperature.

The principle of the cooling system

Depending on the temperature, the liquid circulates through a small or large circle. When the engine is started, the engine and the coolant in it are cold. To accelerate the warm-up of the engine, the coolant moves along a small circle, bypassing the radiator. The thermostat is closed at the same time.

Belt transmission is the transmission of mechanical energy by means of a flexible element - the Doosan drive belt, due to frictional forces or engagement forces (Doosan timing belts). It can have both a constant and variable gear ratio, whose shafts can be with parallel and intersecting axes. The Doosan belt performs two tasks: it operates a gas distribution system and aggregates of additional equipment such as a Doosan generator, a Doosan air conditioner compressor and so on. There is a huge variety of drive belts: - Doosan V-belt - Toothed Doosan belt Also distinguish single-row belts and multi-row Doosan belts. All of the above belts have one task - to drive the Doosan pulley of additional equipment or to drive other systems of equipment. Doosan pulleys transmit torque using Doosan belts. Original and replacement or aftermarket Doosan belts online. BELT - 130202-00005 BELT,V - 65.96801-0120 BELT - 130202-00006 BEL →

The plunger and piston Doosan water pump are widely distributed, as their work is effective at high final pressure. The purpose of the Doosan water pump in the cooling system is to pump the cooling liquid through the cooling system. The main task is to force the coolant into the cooling Doosan radiator, as a result of the operation of the Doosan thermostat and the start of a large circle of engine cooling. How does the Doosan piston water pump work? The principle of operation of the Doosan piston water pump is to pump the liquid by suction. What does it mean? The piston creates a translational motion, through which the liquid enters the cavity of the lower part of the device from a special tube. When the piston does reverse movement, the valve on the pipeline closes and thereby prevents the fluid from flowing back. However, another valve opens on the discharge pipe. At the primary suction it was closed. These processes are repeated again and again, so that the fluid is constan →